By this point, everyone’s heard of Industry 4.0. Governments around the world have been introducing roadmaps to take their manufacturing sectors to the next level, with a vision of manual operations enhanced by the latest smart technologies. This, it is believed, will lead to more connected operations with heightened efficiency and output, in turn boosting economies, among other benefits. In fact, according to PwC, companies with digital processes in their supply chains can boost their revenue by 2.9% and efficiency by 4.1%.

VOX recently covered digitalisation’s transformation of how supply chains function – providing companies with more reactive and resilient supply chains, as well as boosting sustainability and innovation. But the process of digitalisation encompasses a wide variety of technologies, which can each apply to different stages of the supply chain in different ways. There’s even more new technology in the pipeline that could again lead to further disruption.

The Internet of Things (IoT), as the name indicates, refers to physical devices with in-built internet capabilities that can ‘communicate’ with other devices, perhaps sharing quality data. This means that a product or commodity must be fitted with sensors to collect any required data, such as humidity or temperature detectors, as well as wireless capabilities.

One major use-case for the IoT in supply chains is for track and trace systems. Products fitted with GPS trackers can communicate to the manufacturer and customer, allowing its location to be pinpointed at any time – and even allowing for other actions to be taken in case of delays. One company making waves in this space is sennder, a logistics company that is digitalising and automating the entire delivery process. Another benefit, the company mentioned, is that location data allows the company to control driving times and measure rest periods, as well as providing transparency for its customers.

However, to give this visibility to various stakeholders, the IoT depends on cloud technology. Cloud technology refers to data being stored on remote servers via the internet rather than, say, on your computer or within your company’s building. Cloud platforms means that companies can outsource this part of their operations – and have the data visible across various locales. However, as with the IoT, this can introduce security issues – which is critical to consider given the jump in cybercrime since the pandemic began. 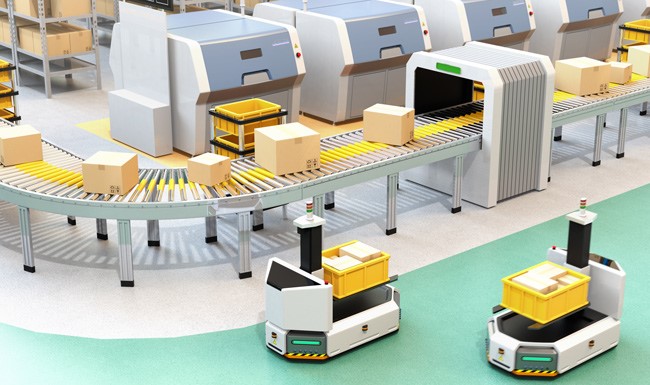 Artificial intelligence (AI), machine learning and predictive analytics are digital tools that have already been used to overhaul supply chains. As Sergio Caballero, a research scientist at the MIT Center for Transportation and Logistics, puts it, “in the past, the problem was we didn’t have enough data — now we have massive amounts of data, and the problem relates to what can we do with it.” AI-led software can parse through data and find relations that a person, or even a team, would not be able to in the same timeframe. Predictive analytics can be used to anticipate changing demand or events that could constrain supply and logistics, supporting supply chain teams in taking immediate actions to take advantage of situations – or remedy anything going awry.

People often imagine that robotics are more of a futuristic possibility, but instead these are already changing industries across the world. Western Europe, with 225 units per 10,000 workers,1 has the most automated production globally, with robotic density highest in Singapore, at 918 units. Robotics can enhance supply-chain operations in myriad ways.

One example comes from e-commerce giant Amazon, which bought robotics company Kiva Systems in 2012. Its robotics are used in a number of Amazon fulfilment centres that collect products and read barcodes. Meanwhile, FoxConn, an electronics manufacturer, has what it calls ‘lights-out’ factories, which combines sensor technology, robots and other technologies to result in a factory without any humans.

As technology advances, so too will our ability to optimise supply chains. And some are touted to be particularly transformative for such operations.

The shift to Industry 4.0 can transform how companies work, but it’ll be a difficult path for many to even begin. For companies used to dealing with physical processes, understanding which software works at each stage and how to make the most of it could be difficult. There’s also the issues of cybercrime and ensuring data interoperability.

However, the gains are immense. Such technologies can dissolve siloed processes, help companies comprehensively track their products, and use data-driven insights to become more responsive and proactive – and that’s just the tip of the iceberg as far as such capabilities go. With a wholly digitalised supply chain, new ways of working can be realised – benefiting both yourselves and your customers.